Second Sunday
8.00am – Holy Communion (Book of Common Prayer).
10.00am – Messy Church at Bodsham School. We join with Elmsted and Hastingleigh Churches in a Family Service at Bodsham Primary School.

Fifth Sunday
10.30am – United Benefice Service at one of the eight churches in the Wye Benefice as advertised in What’s Happening 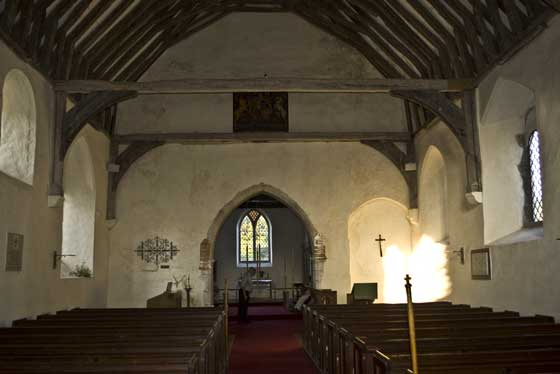 The village has been associated in the past with the Knights Templar and was originally called Temple Waltham, with a Chantry next to the beautiful 13th century church dedicated to St Bartholomew. The church’s beauty rests in its simplicity of design and its unrivalled location looking down from its vantage point along the Duckpitt Valley. We have a peal of six bells with an active group of bell ringers. The church often hosts wine and wisdom evenings and open gardens as fund-raising events, with Lent lunches specifically aimed at raising funds for overseas projects. Village teas are held once a month in the village hall.

Along with the hamlets of Anvil Green and Ansdore it has a population of approximately 180 people of all ages many of whom work locally. Most of the younger children attend the Church of England Primary School at Bodsham whilst the older ones travel to school in Canterbury. Waltham has a very welcoming and caring community.

Waltham is part of the Parish Upon the Hills which is comprised of three churches, Waltham, Elmsted and Hastingleigh, administered by the Wye Benefice. A grouping of Waltham, Elmsted, Hastingleigh and Petham churches are in the charge of Rev Lorraine Lawrence, who lives in Hastingleigh. Funeral, Wedding and Baptism requests are welcomed. For more information, please refer to the Benefice website. 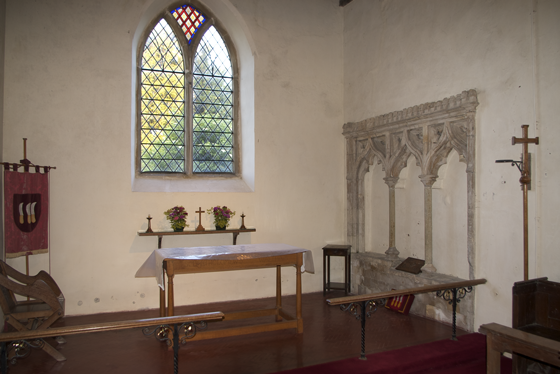 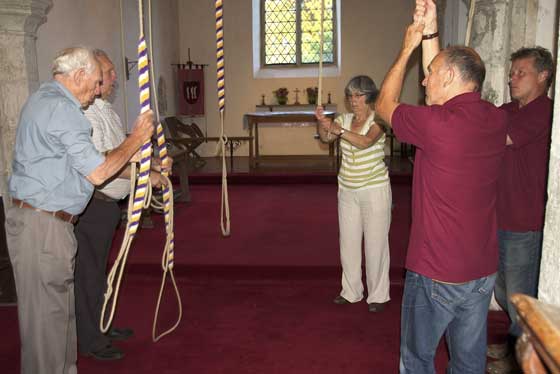 St Bartholomew’s has a ring of six bells. Four date from the 17th Century, and the other two from the Millenium.

St Bartholomew’s has a ringing team that practices regularly both there and at Petham church. If you are interested in learning Change Ringing, contact the Bell Ringers Captain, Mr Brian Law, on 01227 700857.

Details of the Bells

The four original bells in the tower of St Bartholomew’s Church were cast, not as were so many church bells in England, at the Whitechapel Foundry, but locally, at the foundry of Thomas Hatch and his son Joseph, at Ulcome, near Maidstone. The B tone third bell was cast in 1602, and the A tenor C ♯ second and D ♯ treble bells in 1631. The bells are inscribed in Latin, “JOSEPH HATCH ME FECIT” or in English “JOSEPH HATCH MADE ME”.

The bells of St Bartholomew’s were probably tuned in the rare Aeolian mode rather then the common diatonic scale although there is an unkind view that this may have happened by accident at the Ulcombe foundry rather than by design. They are still good bells, not cracked or damaged, of great historical value and worthy of attention.

The 29th June 2011 was the 11th anniversary of the casting of two of Waltham’s church bells and the day when a group of enthusiasts went to John Taylor’s Bell Foundry to see them being cast. In the casting house at Loughborough they saw the metal, a mixture of copper and tin, heated to 1100C and then poured into the mould. The mould is made with founders loam, a mixture of chopped straw, horse dung and urine and a special clay formed by a crook shaped piece of metal called a strickle. Inscriptions and decorations are placed in the outside mould at this point. The outer mould has a metal cover and the whole frame is buried in sand apart from about the top two feet. The actual pouring of the metal to fill the gap takes only a few seconds. It was interesting to note that some parts of the process, such as the founders loam and stirring the molten metal with a willow stick, have remained unchanged since mediaeval times.

After about a week, when the bell has cooled, it is removed from the pit and the inner mould chipped away. It is then ready to go to the tuning house. The tuning is done by removing metal from the inside of the bell, sometimes by a special machine, but often by hand and always little by little until the desired sound is achieved.

Before the new bells arrived there were four bells in the tower, arranged in a line in an old timber frame. All these four bells were cast in the seventeenth century by the same founder, Joseph Hatch of Ulcombe, who was responsible for a vast number of bells in Kent. Even today 88 of his bells can be found ringing in towers across the county and his tombstone still stands in Broomfield church yard. Waltham’s oldest bell is dated 1602 and is considered to be Joseph Hatch’s earliest known bell, so much so that he used the foundry stamp of his father, Thomas. In 1631 Hatch cast another 3 bells to complete the ring of four.

The new bells and retuned old bells were installed late in 2000 and first rung just before Christmas. A dedication service took place on 24th February 2001 when the Rev’d David Cawley was invited to preach and then dedicate the ring, some 34 years after he first worked to get the old four ringable. It was a bright sunny day which prompted David to recall that he used to refer to the Petham/Waltham valley as “The Valley of the Golden Sun”. The church was filled with an invited congregation of proud parishioners and ringers, including the bell hanger, Andrew Mills and thanks were given to the generous contributors to the Millennium Bell Project.

The joint Petham/Waltham band, which is now responsible for ringing the bells, rang a well struck course of Reverse St Bartholomew Doubles to the applause of the congregation.

1602: The first bell was cast by Joseph Hatch – believed to be his earliest known bell. Note that this bell bears Thomas Hatch’s stamp!

1631: Three more bells cast by Joseph Hatch forming bells 1, 2 and 4 around the 1602 bell. This completed the ring of four bells and bell ringing took place for some 300 years.

1960’s: Interest dwindled and no ringing could be recalled in living memory.

1964: Repairs were undertaken and the bells made ringable for another 30 years.

28th July 1996: Bells rung for a last time, following which they were condemned as unringable.

1997: Appeal launched to rehang the bells in a new frame, preserving the old frame, the work to be undertaken by Hayward-Mills Associates.

1999: Bells removed from the tower. Owing to the large workload of the bell foundries at this time, the bells were not restored in time for the Millennium celebrations of 1st January 2000.

29th June 2000: Two new bells were cast to augment the ring to six. The plan was initially to create a ring of six in the Lydian Mode, however, the parish decided to retune the existing bells such that a diatonic six could be produced. Cast and retuned to ring in modern English notage.

23rd December 2000: Rehanging of the remodelled ring of six was completed and the bells were first rung, just in time for Christmas.

June 2011: The 11th anniversary of the new bells and the 409th year of ringing for the oldest bell. Imagine ringing continuing for another 400 years.

Each bell has a maker’s inscription, including the two that were cast around the millenium. The inscriptions are as follows:

This page has been compiled from a variety of source, inluding the previous Waltham website, notes and articles by John Miller, and this website http://kent.lovesguide.com/articles/waltham.htm on which a more detailed history of and other information about the St Bartholomew’s bells may be found.

How we protect your data

Live locally? Want to know what’s going on? Then subscribe to our update service. — It’s FREE!